First, do no harm

Everything that is to follow was photographed on Monday. A great horned owl was in the park. It was decided between a few of us that it would be wise to give this shy bird a chance. The November owl departed after a particularly noisy fly-out. We've been watching, searching since Monday. The owl has not been seen again.


It's hard to make definitive statements, but it's my feeling that this was a different owl, slightly smaller and very different demeanor. However, it could be that it was the same owl, slightly undernourished, or just the conditions of lighting and photographic angle.


The owl was perched high up in a tree near the point very much aware of the few gawkers. There was a school class not far away, kids doing what they do best when outside, screaming. It's possible that this human noise spooked the owl. It flew west. 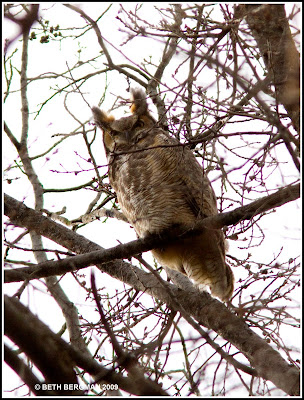 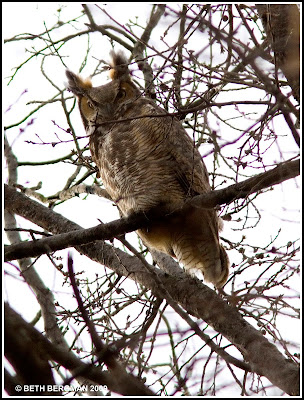 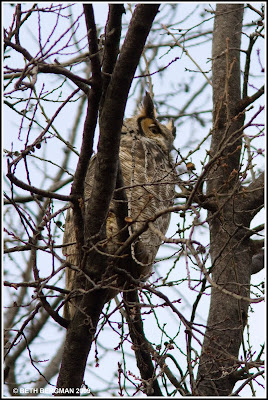 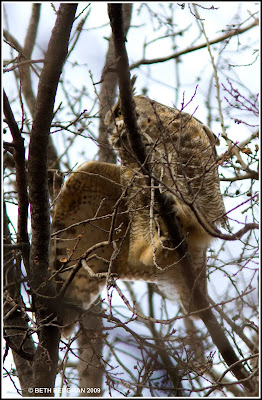 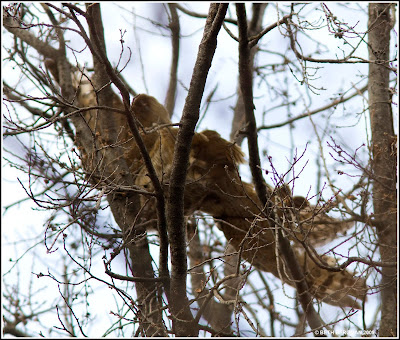 A lot of birding involves sound. Blue jays screaming, crows calling, in this case the alert calls of the squirrels. They were carrying on, so with their calls and no leaves it was easy to find the owl again. It sat for a long time. It didn't seem disturbed by the helicopter that flew by, but it did note the sound of children, so very fast, Dan ran to this class of very young children, explained about the owl and asked them to whisper. They did. Little kids, ages 5-6, really don't see details far away, but we did our best, explained that it was an owl, and I showed them close-up pictures on the camera screen. The last little girl in the group, a real honey in pink, smiled, snuggled up to me and whispered that she had a pet owl at home, that her owl sang to her, whisper whisper. There's nothing like a little imagine. The real owl stayed put. It yawned, relaxed, but didn't really sleep. Too exposed. 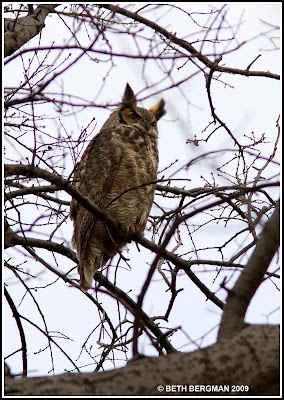 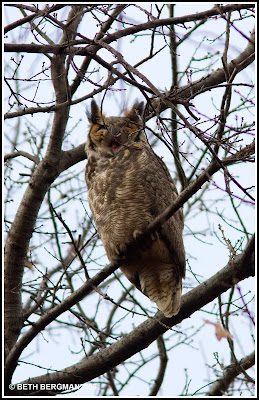 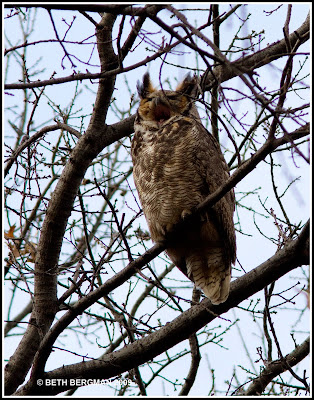 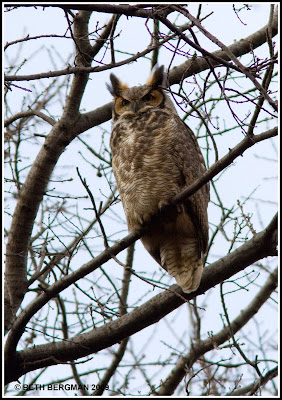 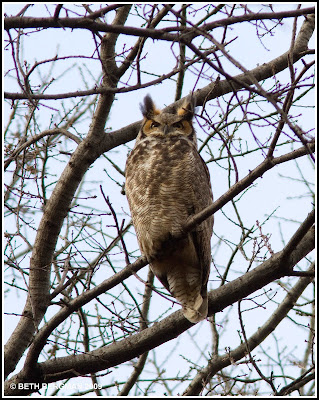 I didn't stay very long. I figured that the owl would spend the rest of the day roosting there. I headed north where I saw the skinny cooper's hawk shown in a previous blog. I checked the Great Lawn area and then headed back towards where I had seen the cooper's hawk. And that's where the next part of the adventure picked up. I was on the path and heard a terrific CRACK, a large branch breaking off and plunging down. I looked up. Oh, my God, the owl! 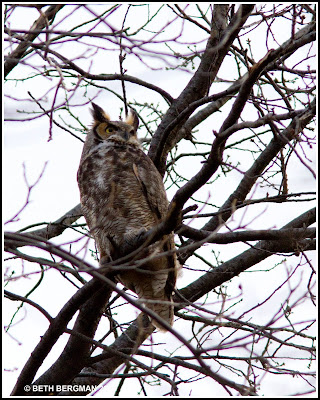 I couldn't believe it, but what my eyes saw next stunned me, double OH MY GOD!, both owl and cooper's hawk in same tree. Face off time. The November owl had presence. It sat and other birds avoided it like the plague. We saw red-tails giving it wide berth. Nothing was coming near that November owl. Now here was a cooper's hawk challenging this owl. That's why I suspect this was a different owl. It didn't have the "moxie" of the previous owl.
My lens is too powerful. I could get one bird or the other, so what I've done is a series, not framed, and can show the time of each exposure. The digital camera records date and time down to a split second. Just the time sequence documents that these birds were in the same tree. Actually they were together in three trees facing off. There was nothing pretty about this. It was a challenge of the first order. The unframed images are for truth-of-reportage. The cooper's screamed at the owl. The owl glared back. The face-off lasted from 1:34:59 until 1:41:22 and ended with the cooper's chasing the owl north in the direction of the Beresford. As you can imagine I was flipping out. No other birders or even humans around. How often would someone see something like this, a territorial battle between raptors. When the two birds headed north I had a choice, run after them or find another birder. I opted to find another birder and found Dan and Ann. While I was describing what I had just seen we saw a screaming peregrine falcon zooming south parallel to Central Park West. The assumption was that it was fleeing the hawk/owl confrontation. The unframed images that follow show the time shot for each image. 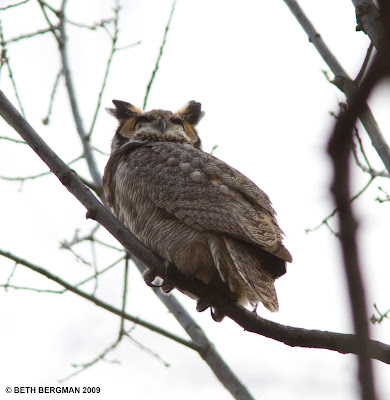 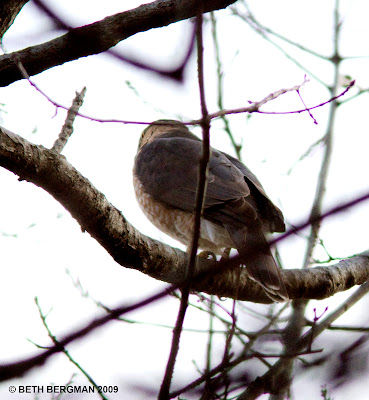 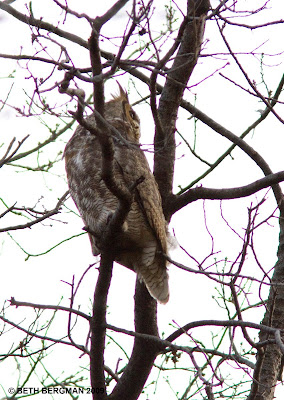 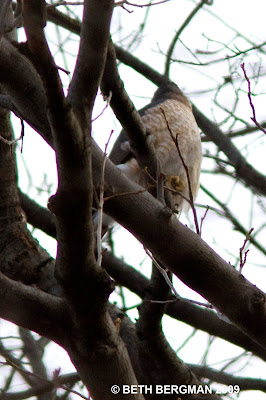 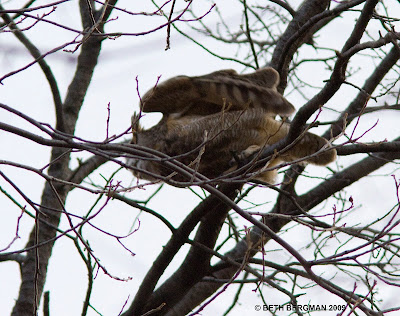 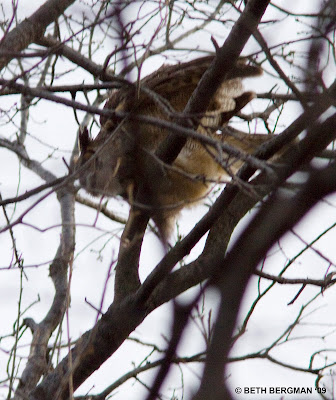 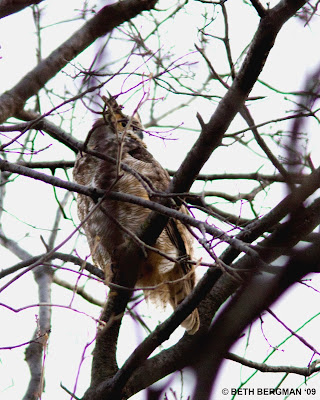 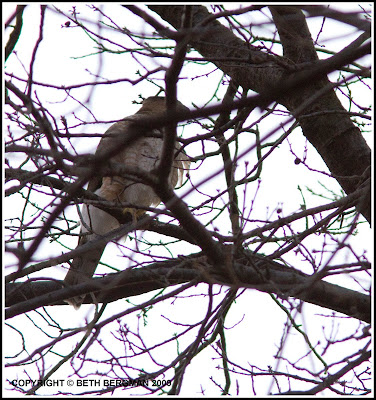 1:41:22
The final images are done taking some artistic license. The owl is so beautiful. It was possible to clean away some of the branches to make the owl stand out. All of this took place on Monday. This poor owl got no rest. Humans adore the owl and it was certainly seen by a lot of people, but ultimately, it was its own kind that drove it out of the area. The decision to delay posting was to give the owl a chance. The park is a small space. The cover at this time of year is minimal. This owl was shy. It was seen that night, but not since. Smart owl. It needs better cover in order to get some rest. But I'll NEVER forget what I got to see by simple luck. 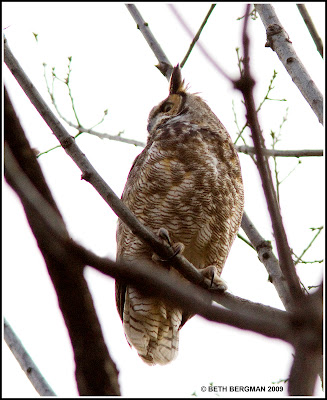 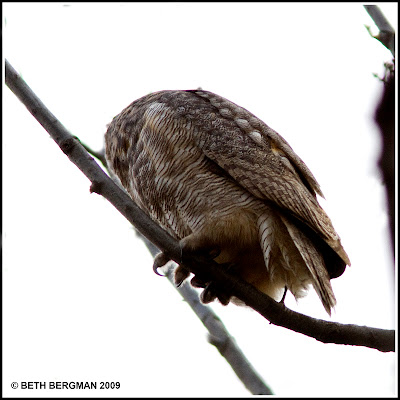 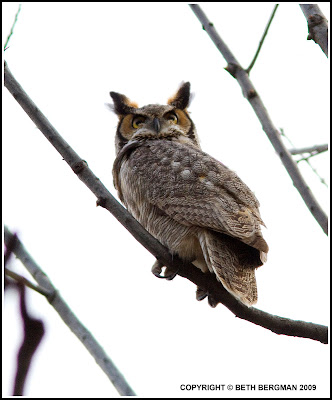 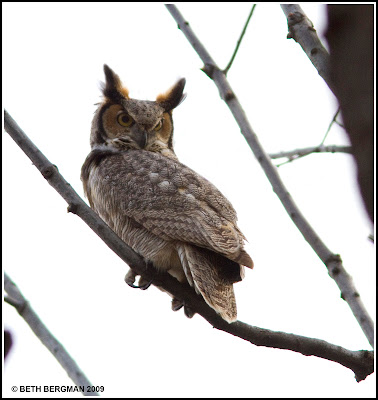