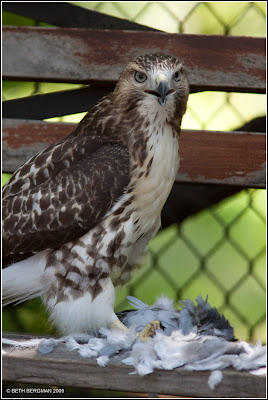 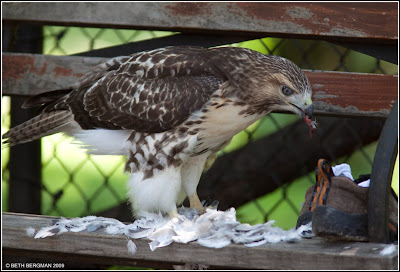 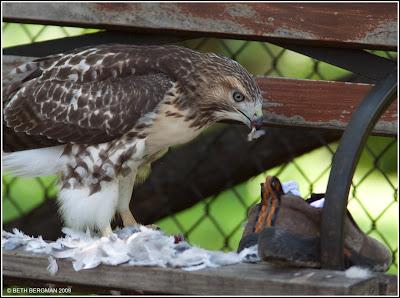 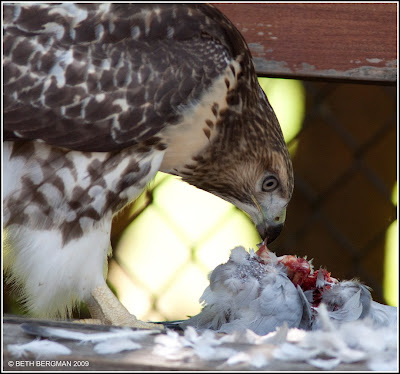 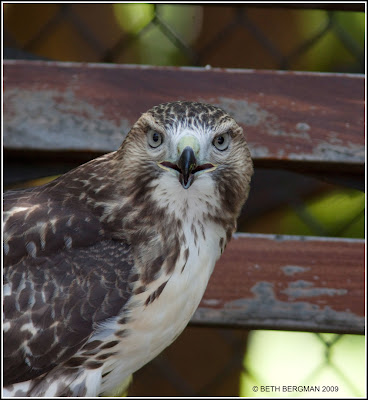 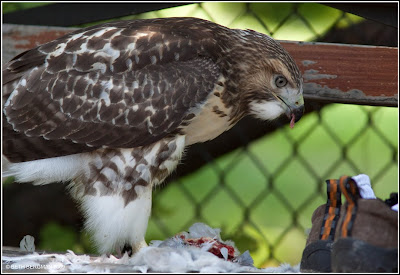 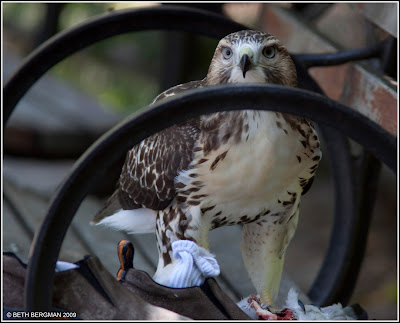 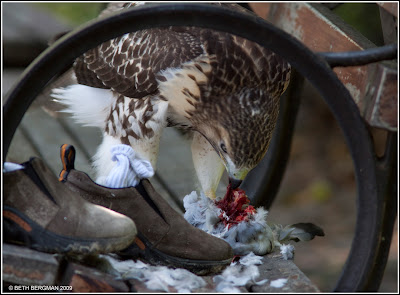 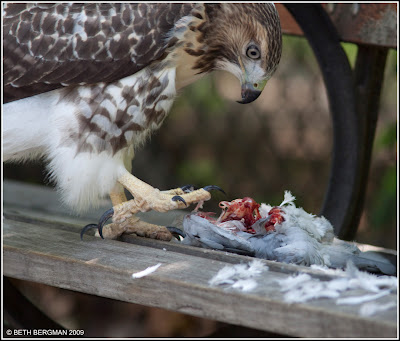 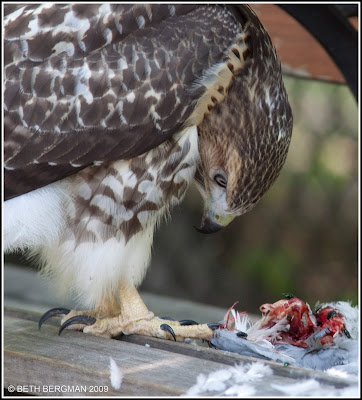 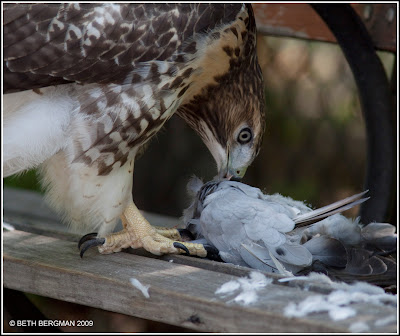 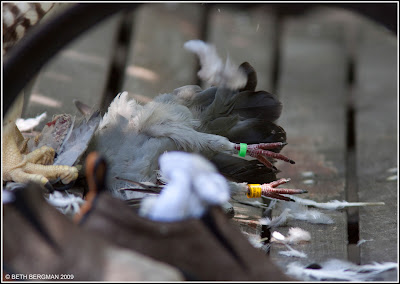 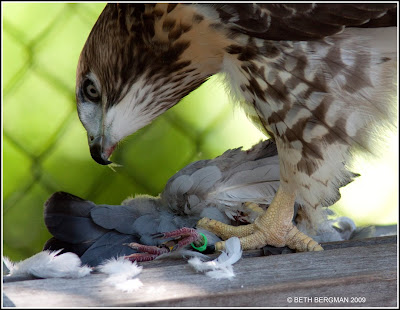 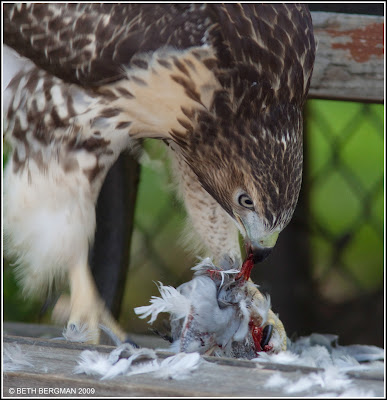 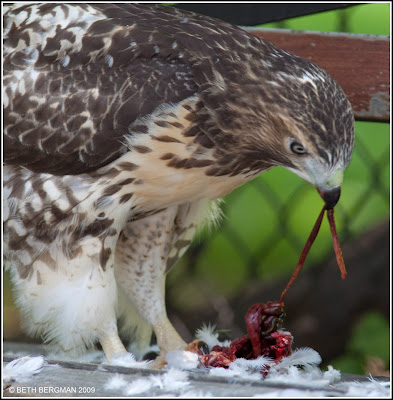 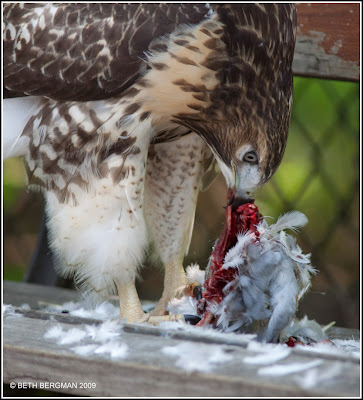 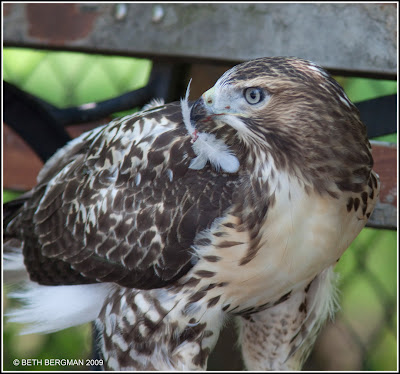 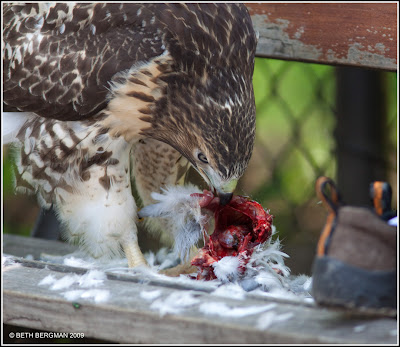 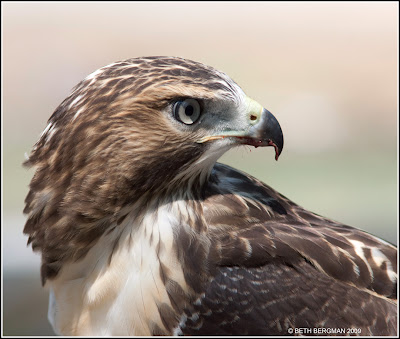 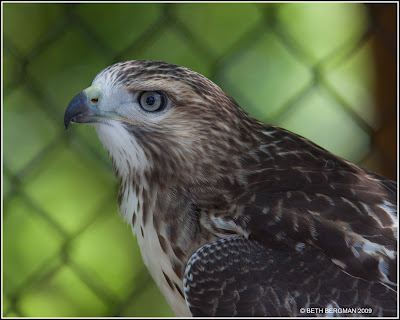 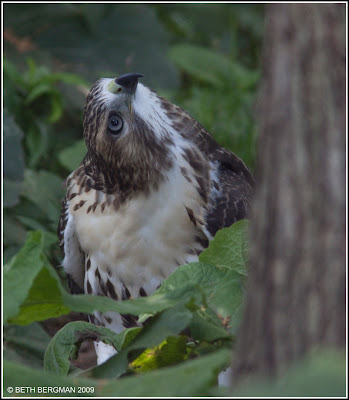 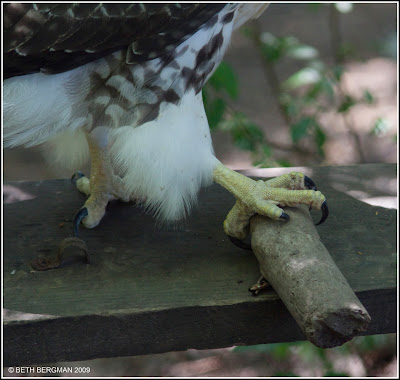 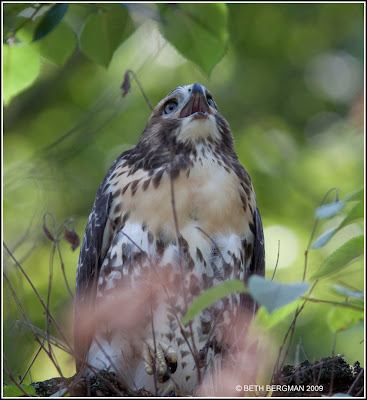 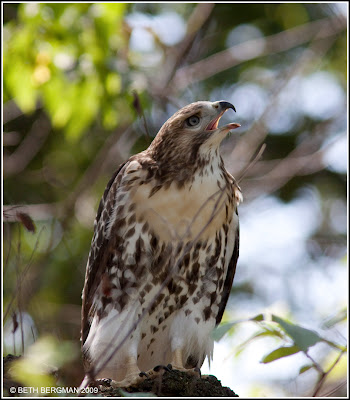 The feathers.. .that's what caught my eye, flying feathers. With young hawks you have to be prepared to see the unexpected. Mama hawk delivered a pigeon. Baby #1 got it. Baby #1 did the expected. Dropped it. Baby #2 got the pigeon and with difficulty finally carried it to a fine dining table, - a bench in the playground.


Logistically, this was a good spot,.... protection overhead (tree limbs), protection from the rear (fencing). So what if the playground was filled with kids and their parents and so what if there was a pair of shoes on the same bench. Kids run into the sand box and wading stream, so the parent had placed the shoes on the bench for safekeeping. Now the two young hawks had taken possession of the bench.
Hilarious...... feathers, blood and gore... kids gawking, parents gawking, lots of questions and two hawks oblivious to everything expect their meal. Baby #2 had enough so Baby #1 took over, flipped the bird, yanked out more feathers, ripped at the delicious meat. It was about that time that I saw the pigeon's legs. Banded!!! This spelled danger, plastic tags, not good for hawk dining. I know hawks eat legs. I wasn't sure how to do what needed to be done, namely get the pigeon away from the hawks. There wasn't much left of it, so this would not have been depriving the hawks of a major amount of food.
Fortunately, fate intervened. The shoe owner needed to leave, had been waiting patiently for the hawks to finish eating (already 90 minutes) and couldn't wait any longer. She walked near the bench and called, "Shoo". Hawks ignored that. I suggested she find a long narrow stick so that she could maybe gently nudge the shoes off the bench. She found a stick 3" long. That wasn't going to work. Finally a plan ... Murray was there taking pictures, camera on tripod. I asked if he'd take the camera off the tripod and use one tripod leg extended to nudge shoes off bench. That would be a good 6' extension. It worked. The shoes fell to the ground away from the bench and the hawk flew a few feet to a bench next to a bookpack right in the midst of toddlers. The hawks are as goofy as kids in the playground. Hawk babysitter for kids in the sandbox?

The hawks had obviously had enough to eat. They didn't return to the pigeon remains. I carry plastic bags and rubber gloves, got the number off the pigeon ID tag and disposed of pigeon, -wrapped, into the garbage can, no more danger to hawk digestive tracks. Pigeon number IF 2009, 50th ANN.LCM #14 is not coming home. Eaten.

The pigeon being eaten seems to be banded. Was it? Any idea why?