Not in my backyard 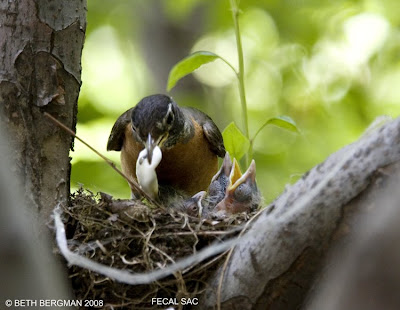 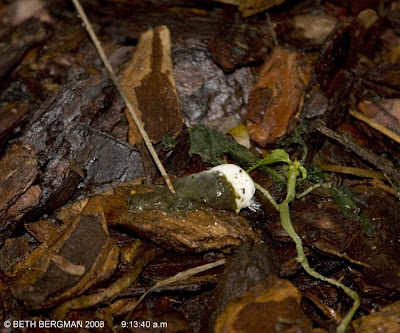 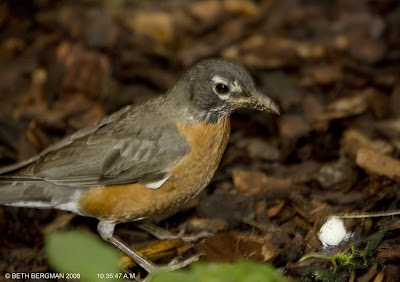 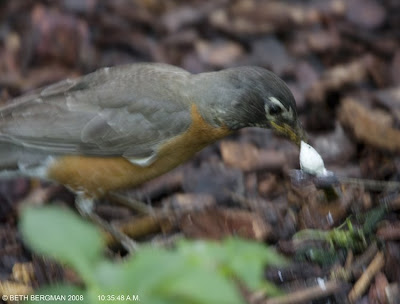 The robins are fastidious housekeepers. They have to be since the family is going to live in the tiny nest for at least two weeks. The babies eat, then poop (fecal sac) and the parents remove this immediately either by eating the sac, (nutritional value), or taking the sac far away from the nest. Sometimes the deliver is tiny, other times ENORMOUS. This morning I saw a first. The kids are big now, don't really fit into the nest. It's a feather muddle-huddle. Kids got fed and one baby pooped, but its little po-po extended beyond the nest and the fecal sac flew to the ground at the base of the nest tree. The proverbial, when s--t flies. The mama saw that, walked right over her kids and stared down to the ground. That was 9:13:40 a.m. I watched. Mama didn't do anything though. I had to go photograph some caterpillars, so I went off for an hour. An hour later I returned to the nest. Kids still at home. Blob still on ground. At 10:34 a.m. mama flew in with chow and tended to kids. Right after that she flew to the ground, 10:35:47 a.m., took that "trash" and flew it away. Housekeeping inside the nest and out. About five minutes later our human groundskeeper came by with his wheelbarrow checking up on the kids. I showed him the pictures of the mama robin doing her own garden maintenance. His reply, "I watch them, so I don't run over them when I mow the lawn". Thank God!
_______________________________________________
Posted by Beth Bergman at 10:24 AM