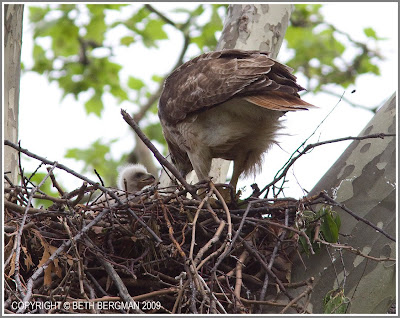 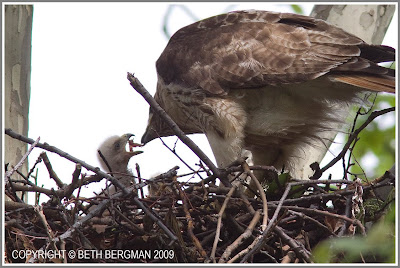 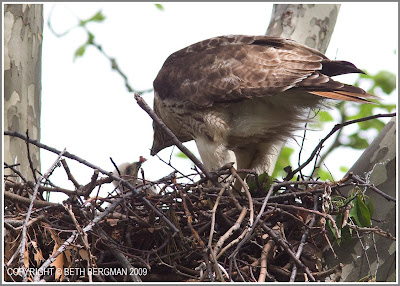 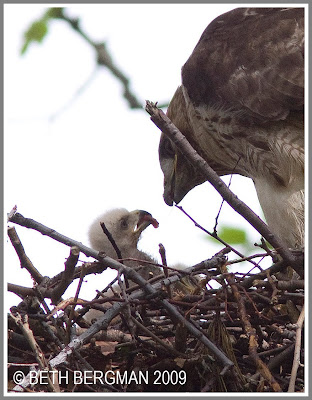 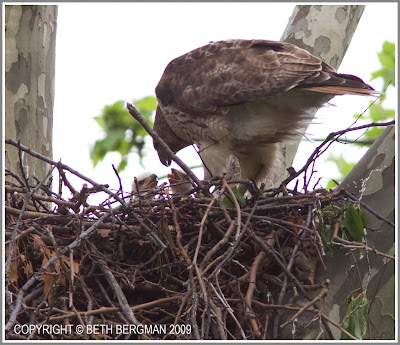 The day began with the song of a warbler which I had to find. Pictures for tomorrow. Then I checked up on Mama Robin. All fine. Still sitting in exposed nest. That meant that I got to the hawk nest later than usual. Just in time for feeding time. I could see two babies very well. It's possible that the third baby is still very small. It's a hard nest to photograph because of back lighting. Mama feeds facing west, sometimes southwest, sometimes northwest. I've stood on paths, climbed up to highway level, even climbed on the trucks parked on the path. It's not easy, but the babies are growing. She rips off a tiny piece of meat and feeds baby. Sometimes she rips off a chunk and feeds herself. While there some people arrived from the Audubon Society. They're doing a documentary about birding in New York. I got interviewed. Maybe the results will be included in this documentary, maybe not. It doesn't matter. It was fun.
After three hours I headed back here and once again checked on Mama Robin. No Mama in nest. All during the afternoon I checked the nest. No Mama. I had a tall friend look into the nest. Three little eggs. Heartsick I figured that the nest was abandoned, but a little while ago I went down again to check. Mama is back in the nest. It was a warm day. Mama knows best. Warm weather, leave nest and go play for a while. I still fear for the safety of this nest. I'll blog a few hawk treasures. More tomorrow, because a lot was going on- twig deliveries, rat delivery, babies being fed, both parents in nest..... a totally wonderful day.
____________________________
Posted by Beth Bergman at 3:35 PM